Master the Inner Game of Communication 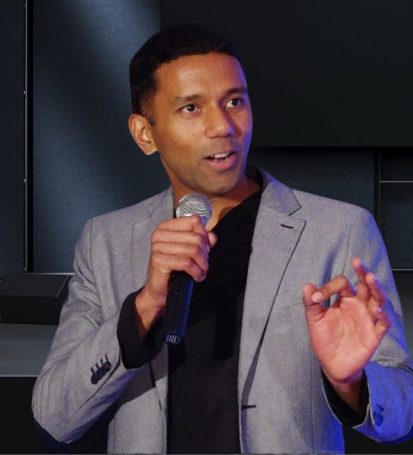 Every engineer can become a rockstar communicator

No matter where you come from, what you look like, you should be able to speak to anyone without feeling small. This course will help you enhance the inner game of communication so you can speak confidently to an executive or the prettiest girl in the room. The tools you will learn will help you attract high-value people in your life who will help you grow and gain fulfillment.

What different about it?

Rather than providing you tools and techniques to communicate, this course goes deep into addressing your mindset. It is similar to fixing the root cause of a software bug instead of applying patches that only fix the issue temporarily. Once you address the mindset, you will gain the confidence to communicate with everyone effectively.

Aditya Guthey, originally from Visakhapatnam, South India has been told he was ugly, stutterer and no one would listen to him speak. Today, he is an International Speaker travelling the world to help high potential engineers become rockstar communicators.

Aditya started his career as an engineer and worked his way up to becoming a senior engineer at companies like eBay and Verizon. With the inspiration from his wife, he later got certified as an executive coach. The path allowed him to uncover his potential as a rockstar speaker, winning third prize at the district championship and inspiring many others.

Having started off as a nerd and now emerging on the other end as an award winning Speaker and a performance coach, Aditya has walked the journey of transformation. Combined with the certifications and training he has acquired over the last couple of years, he brings forward a powerful set of tools to help you transform into rockstar communicators.

Why does it work?

This program is unique because it will not only TEACH you the fundamentals of a handstand, but it will also TRAIN your body to have strength,control and stability necessary to stay balanced upside down.

Each week and each day will focus on a different critical element of a proper handstand. You will start each lesson with a 10-15 minute, follow-along video. These demonstrations are led by both Adam and Andrew.

After you follow the demonstrations video,you will be provided with a 40-60 minute long exercise. This is where the real difference is made. The strength, mobility, and stability that you will build will be the key to holding a handstand.

How to Fall – Safety 2nd

I finally did it!!! I held my first handstand for about 10 seconds! Thank you so much for such an incredible program! My mind and my body feel so connected. I loved how the program was not just handstand tutorials but also really amazing exercises specific for developing handstand skills."

“Adam and Andrew make a great team for coaching handstands. Yoga and calisthenics… What more could you ask for!? Also, the app is really great quality! I love how it shows my progress as I completed each day of training.”

“For years I’ve been trying to handstand with little to no success. I watched 100s of tutorials but I was unable to keep my body controlled while upside down. After 4 weeks on Adam and Andrew’s program, I feel stronger, more mobile, and best of all, more body control. I can now hold myself in a handstand for up to 15 seconds. I don’t stick it every time but it’s becoming more and more frequent! This is just the beginning!”

So what are you waiting for? Get excited and get ready to get on your hands!